A site in southeastern New Mexico has been proposed to house the nation’s spent nuclear fuel until a permanent repository can be built. 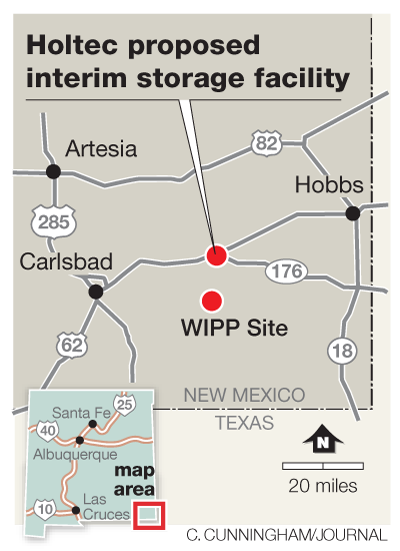 The proposal is in the midst of the licensing process with the Nuclear Regulatory Commission. But a number of financial, regulatory, public support and political challenges remain before the project could come to fruition.

Currently, many of the fuel rods are temporarily entombed in above-ground steel-and concrete-lined casks, while rods that are still too hot sit in pools of constantly circulating water to keep a catastrophic nuclear chain reaction from occurring.

The plan was, originally, to store the rods in the pools until they cooled enough to be reprocessed into additional fuel, a process the Carter administration ended up banning due to fears of nuclear proliferation.

With no permanent disposal site expected to be completed until mid-century at best, the fuel rods remain in the crowded pools and in dry storage awaiting a place of repose.

The NRC accepted the application for review of the New Mexico site at the end of February.

"This is the missing piece of the system to manage the back end of the fuel cycle," said John Heaton, chairman of the Eddy-Lea Energy Alliance, a limited liability company made up of Eddy and Lea counties and the cities of Carlsbad and Hobbs. The Alliance is working on the project with Holtec International, a supplier of equipment and systems for the energy industry headquartered in Jupiter, Fla.

The Alliance purchased about 1,000 acres of land located between Carlsbad and Hobbs for a consolidated interim storage site.

Heaton said the project will likely cost $2.4 billion when it’s all said and done; not much, he said, when compared to the taxpayer money the project could save.

He cited a 2016 study by Oak Ridge National Laboratory that predicted $15 billion would be saved by 2040 if a consolidated interim storage facility is used, and the savings would increase from there.

The 1982 Nuclear Waste Policy Act stipulated that the federal government would take ownership of spent nuclear fuel for placement in a permanent repository by 1998.

When that didn’t happen, utility companies sued the U.S. Department of Energy.

As a result, the DOE has reimbursed companies – and continues to do so – for the temporary storage at power plants around the country.

A Blue Ribbon Commission of the Barack Obama administration determined that by 2020, the DOE will have spent $22 billion on those costs.

Consolidated interim storage is "really the quickest path for DOE to take title to the spent fuel and stop the lawsuit," Heaton said.

Richard Zuercher is a spokesman for Virginia-based Dominion Energy, which operated four U.S. nuclear power stations until 2013, when low natural gas prices caused the company to close its plant in Wisconsin.

All of the spent fuel from that facility is sitting on site in dry storage casks that cost around $1 million apiece, with a full-time security team in place.

"The government had promised to ultimately dispose of the fuel. That was a promise made to the communities that hosted these nuclear facilities," Zuercher said. "These facilities were not made to be permanent facilities."

Rod McCullum, senior director of fuel and decommissioning at NEI, pointed out that, in many cases, nuclear power plants are decommissioned and the spent fuel on site is all that is keeping the sites from being repurposed.

Heaton has touted the proposed site as safe and secure, as well as being in close proximity to utilities and to rail lines, which is most likely how the spent fuel will be transported, because of its extreme weight.

Even if the project is licensed, though, there will still be a long road ahead.

The Nuclear Waste Policy Act would need to be amended to allow waste to be transported to an interim site, but most of New Mexico’s congressional delegation has already expressed opposition to the project – at least until plans for permanent disposal are in place.

"I won’t support an interim disposal site without a plan for permanent disposal – whether the site is in southeastern New Mexico or anywhere else in the country – because that nuclear waste could be orphaned there indefinitely," Sen. Tom Udall said in a statement.

Republican Rep. Steve Pearce said any nuclear storage facility must come with "strong support by the communities that will host it."

The Yucca Mountain project in Nevada, intended to be a permanent repository for the nation’s spent nuclear fuel, has largely languished since Obama pulled funding for the project in 2011.

A federal resolution that would amend the Nuclear Waste Policy Act to allow for interim storage was introduced in the House in June 2017 and is pending.

Democratic Rep. Ben Ray Luján, who sits on the House Committee on Energy and Commerce, voted against favorably reporting the legislation last year.

Another amendment to the NWPA introduced in January last year may provide a path toward funding the consolidated interim storage project.

The Nuclear Waste Fund, which once collected fees from utility companies to be used to fund a permanent repository, now contains nearly $40 billion.

That aside, many have expressed concerns about the safety risks involved in carting highly radioactive waste thousands of miles.

"It’s not safe, which is why the people who have it want to get rid of it," said Don Hancock, director of the Nuclear Waste Safety program at Albuquerque’s Southwest Research and Information Center. "A lot of us believe in improving storage where it is."

Hancock also said the cost of building railroad tracks to connect the current storage sites and the Holtec site to existing railroads and other transportation costs would negate any savings proponents allege.

According to Holtec documents, the company estimates rail lines will cost $12.78 million.

But Hancock said not all existing railroads will be able to handle the weight of a loaded transport cask, which he said will weigh at least 371,000 pounds.

"Someone is going to have to invest a LOT more money than that to upgrade the railroads," he wrote in an email.

Bob Alvarez, a former senior policy adviser to the Secretary of Energy and board member of the Los Alamos Study group, said it’s also unclear what would need to be done before transporting the spent fuel.

Some of the casks, which have been sitting around for decades in some cases, may not be appropriate for transport and may require repackaging, which adds an additional price tag.

Alvarez said for some reactors, the cost of repackaging could be as much as $1 billion.

"There’s sort of an element of magical thinking on this stuff," he said.

Gov. Susana Martinez, the cities of Carlsbad and Hobbs and Lea and Eddy counties have expressed support for the project and touted its potential economic benefits.

"I support the ELEA and its member cities and counties in their effort to establish a consolidated interim storage facility in southeastern New Mexico that will be regulated by the high safety and technical standards of the Nuclear Regulatory Commission," Martinez wrote in a 2015 letter to then-Secretary of Energy Ernest Moniz.

But opposition does exist.

Rose Gardner of the Alliance for Environmental Strategies, who lives in Eunice, argued that New Mexico is home to no nuclear power plants; why should the state take responsibility for waste generated largely on the East Coast?

She’s also unconvinced of the safety of Holtec’s containment system.

Noel Marquez, a community artist who lives on a farm in Eddy County, said he believes the area’s poverty and low English proficiency rate has made it a target for facilities such as the Waste Isolation Pilot Plant, which permanently houses low-level nuclear waste, and the one the Alliance and Holtec are proposing.

"If they don’t want the poison where it’s at, why would we want it?" Marquez said. "We feel threatened."