Congress keen on N.M. interim storage, locals not so much 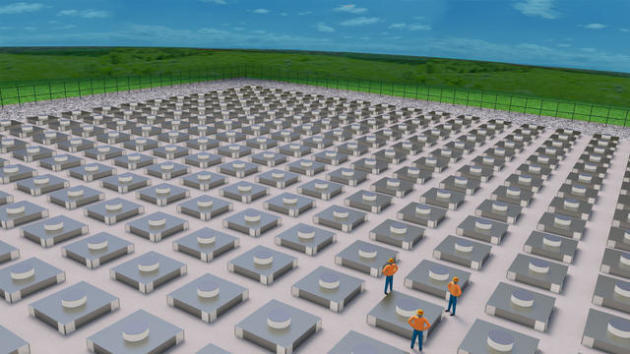 In Washington, D.C., many lawmakers are excited about commercial interim nuclear waste storage facilities, which they see as a way to move spent fuel away from reactors around the country and store it temporarily until a long-debated permanent repository comes to fruition.

But on the ground in southeast New Mexico, where a company called Holtec International and a coalition of local officials have proposed building such an interim storage operation on a 1,000-acre site between Hobbs and Carlsbad, opponents say it does not add up.

Holtec is the farthest along of the two companies looking for licenses from the Nuclear Regulatory Commission. Three years after first introducing its plan, the NRC is now two months into what will likely be a multiyear review process.

The regulator held three meetings in the state last week in Roswell, Hobbs and Carlsbad. Opponents and supporters of the project both tried to use those gatherings to their advantage.

Don Hancock, director of the nuclear waste program at the group Southwest Research and Information Center, said Holtec critics were aiming to "demolish the idea that New Mexico consents" to the plan.

Consent is a murky issue with the project, as it has been with other nuclear waste proposals. Reports suggest Gov. Susana Martinez (R) is in favor. The truth may be more complicated, say critics.

"The idea that state government supports this is not true," said Hancock. "It’s old and not specific."

Martinez wrote a general letter of support years ago before the details of Holtec’s proposal were available, he said. And the state’s environment secretary was at the meetings last week but did not weigh in.

Aides for Martinez, who is term-limited, did not respond to an E&E News request for comment about her current stance on the waste proposal.

Also, while both chambers of the state Legislature passed resolutions in 2016 supporting the project, more recently 30 legislators, including the initial House resolution’s sponsor, wrote to the NRC expressing concerns with safety and asking for more time for the state to examine the proposal.

Then there’s local and indigenous consent.

Leona Morgan, an organizer with the Albuquerque-based Nuclear Issues Study Group, said the proposal is a form of environmental racism. "We think other people view New Mexico as a sacrifice zone," she said.

And people are unable to consent to a project they do not know about, Morgan said. "We’ve done outreach in several communities in New Mexico and at public events, and I would say about 90 percent of the population we’ve been speaking to has no knowledge of this project," she said.

" The government is really not doing a good job at public notice," Morgan said. " It’s ridiculous to think that New Mexico consents to this when a lot of New Mexicans have no knowledge of it."

Beyond consent, opponents also question the key premises behind the project. "If storage is safe at the reactor sites, which is what NRC and the industry says, why do you need to move it?" said Hancock.

" And if it’s not safe at the reactor sites, why is it going to be safe somewhere else and how could it be safe to transport it?" he said.

Then there’s the fact that New Mexico has no nuclear power plants itself. "Thirty-four states do have commercial power plants or spent fuel. Why do none of those 34 states want to keep it?" Hancock said.

For its part, Holtec has talked up its consolidated interim storage facility (CISF) design and downplayed the opposition.

"Joining the few local dissenters were activists from Texas and California whose opposition lacked clarity and specificity," Holtec said in a statement.

"Displaying utmost poise in the face of interruptions from activists, the NRC officials listened to all speakers to help define the scope of their ongoing environmental review," the company said.

The Eddy-Lea Energy Alliance, the coalition of area leaders that owns the project site, also says Holtec’s design is safe and that the project would bring economic benefits to the region.

Besides the license approval from the NRC, the Department of Energy would also need authorization from Congress to move waste to the proposed facility.

A bill from Rep. John Shimkus (R-Ill.) up for a vote in the House tomorrow would, along with advancing the proposed permanent repository at Yucca Mountain in Nevada, provide that authorization for the interim storage (E&E Daily, May 9).