Nuclear waste storage project opposed by many during public meeting

ALBUQUERQUE, N.M. — After public meetings hosted around the state, leaders at Holtec International, the company that has proposed the building of an interim storage facility for the nation’s spent nuclear fuel in southeast New Mexico, say they haven’t heard any valid arguments against the technical aspects of the project.

But more than 100 people still attended a more than three-hour meeting hosted by the U.S. Nuclear Regulatory Commission to voice their concerns Tuesday evening in Albuquerque.

The majority spoke out against the project, with many whooping and applauding their agreement and booing at statements made in support of the proposal.

The meeting was the fifth held in recent weeks around the state, including in Gallup, Carlsbad and Hobbs. 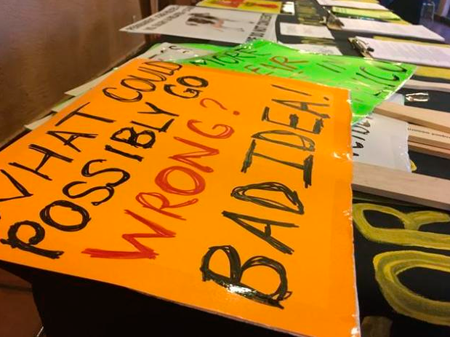 Signs protesting the Holtec interim storage project in southeast New Mexico rest on a table during a public meeting on the project hosted by the U.S. Nuclear Regulatory Commission on Tuesday in Albuquerque. (Maddy Hayden/Journal)

Opponents of the project expressed doubts about the safety of transporting the fuel across the country, possible ill effects of radiation to local communities and threats posed by terrorists. They also questioned the reasoning behind placing a spent fuel storage facility in a state that is home to no nuclear power plants.

Former Journal reporter Denise Tessier, who said she covered the process that led to the construction of the Waste Isolation Pilot Plant in the 1970s and 1980s, contended the Holtec site violates promises made to the state back then by WIPP proponents.

"Throughout the years of discussions, New Mexico was told if we would accept low-level transuranic waste … we would not be asked to take high level nuclear waste in the future," Tessier said. "Bringing spent fuel rods into New Mexico is, in my view, a violation of the spirit of years of discussions and efforts that went into the opening of WIPP and that can and should factor into the rejection of the Holtec proposal."

During a meeting with Journal editors and reporters earlier in the day, Holtec officials and John Heaton, chairman of the Eddy Lea Energy Alliance, which is partnering with Holtec on the project proposed for a site halfway between Carlsbad and Hobbs, expressed utmost confidence in the technology involved in the transport and storage of the spent nuclear fuel.

Noel Marquez of Artesia, cofounder of the Alliance for Environmental Strategies, wears a t-shirt reading "No Holtec International" during a public meeting on Tuesday in Albuquerque. (Maddy Hayden/Journal)

"This is not Holtec’s first rodeo, so to speak," said Joy Russell, Holtec’s vice president of corporate business development.

Holtec constructed a similar, but much smaller, facility at the San Onofre nuclear power plant in California and was licensed to construct an interim facility in Utah, which never came to fruition. The company’s dry storage casks are used for around half of the current spent nuclear fuel awaiting disposal at more than 70 nuclear power plants around the country.

Holtec and the alliance also confronted concerns over the time frame of the project. Opponents and skeptics have worried that the "interim" site will become a de facto permanent repository.

"Everybody I speak to, they say if you move it here, it’s going to be here forever," Holtec project director Ed Mayer said. "That’s not the intent. We think it’ll be there for decades … but it won’t be there forever."

A permanent storage site, such as the beleaguered Yucca Mountain repository, is not expected to be complete until mid-century at best.

The New Mexico storage proposal is in the licensing phase with the Nuclear Regulatory Commission.

Should the license be accepted, Mayer said the company hopes to begin construction in 2020 with the first shipment of spent nuclear fuel being accepted in 2023.