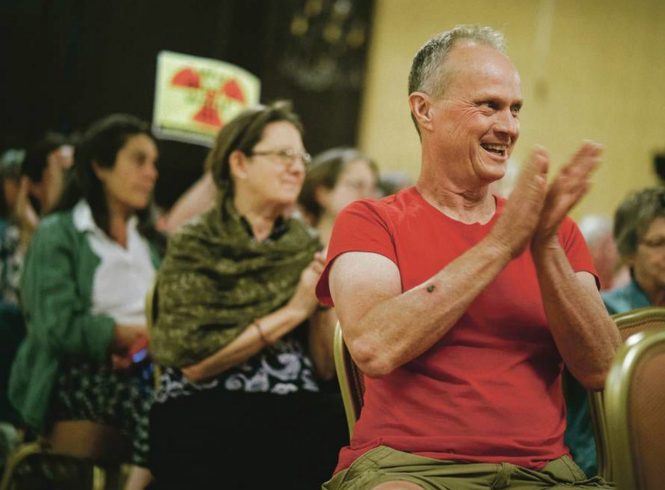 ALBUQUERQUE — In a crowded hotel ballroom, a once-regional battle over New Mexico’s nuclear future evolved into a statewide showdown.

Dozens of concerned citizens and environmentalists took to the microphone at the Crowne Plaza hotel in Albuquerque on Tuesday night to voice their opposition to a project they said could put New Mexicans at risk of deadly radiation while further pigeonholing the state as the nation’s nuclear-waste graveyard.

At stake in the melee: The economy of one of New Mexico’s most profitable corners, the safety and security of the state’s residents — and the future of nuclear waste disposal in the United States.

Proponents of the plan — including Gov. Susana Martinez; U.S. Rep. Steve Pearce, R-N.M.; and a slew of downstate lawmakers, business owners and citizens — say the region’s geology is ideal for the proposed facility, and the economic benefits are well worth what they see as nearly nonexistent risks.

In March 2017, Holtec International, a Jupiter, Fla.-based energy technology company, submitted an application for a 40-year license to build and maintain what could be the nation’s largest interim repository for high-level nuclear waste.

The rods would be moved to the site in thousands of cross-country rail deliveries over the course of about 20 years — a process opponents of the plan said would put people at risk.

"For those concerned about security, that translates into thousands of opportunities for attacks or thefts of spent fuel," said Barney McGrath of the Santa Fe Democratic Party. Others worried about radiation leaks and derailments during transport.

"Each rail car is like the equivalent in plutonium of what got dropped on Nagasaki," said Karen Hadden, executive director of the Austin, Texas-based SEED Coalition, an advocacy group. "It’s not in bomb-grade form, but it’s huge."

State Sen. Cisco McSorley, D-Albuquerque, said that when it comes to the nuclear industry, New Mexico has "borne the brunt" for too long. He said the federal government has broken too many promises. "The idea that we are going to give a company, a for-profit company, the ability to handle uranium that is going to be radioactive and deadly for six million years … to me that seems ridiculous," McSorley said.

Holtec executives said the facility would generate about 100 temporary construction jobs and another 100 permanent positions with salaries ranging from $60,000 to $80,000 a year.

The host communities also would take home an incentive payment to be shared with the state.

About 200 people filled the hotel’s ballroom for the hearing held by the federal Nuclear Regulatory Commission. It was the sixth meeting so far in the public comments stage of the application process. The NRC also has held forums in Gallup, Roswell, Hobbs, Carlsbad and Washington, D.C.

Of the more than 60 commenters, the vast majority voiced opposition to the project.

John Heaton, a former state representative from Carlsbad, is the chairman of the Eddy-Lea Energy Alliance, a coalition of the cities of Carlsbad and Hobbs and Eddy and Lea counties. The group has partnered with Holtec to bring the site to fruition.

He said the waste would be packaged with "triple redundancies on any possible materials getting out."

Nuclear material would be housed in zirconium rods, which would be packaged in stainless steel canisters. Those would be contained in 15-inch-thick concrete transportation casks.

Holtec has applied for a license to store 8,680 metric tons of nuclear waste, but ultimately the facility could house 20 times that amount — more waste than has been generated in the history of the nation’s nuclear power plants.

Until now, plants have been storing their own waste in large concrete barrels. The federal government has deemed the waste safe to store for 60 years after a site is decommissioned, but proponents of the proposed short-term dump say the barrels aren’t safe, after all.

There are 60 active nuclear power plants in the U.S., most of them east of the Mississippi River. None are in New Mexico. Another 31 plants, some of which still house spent nuclear rods, already have been decommissioned.