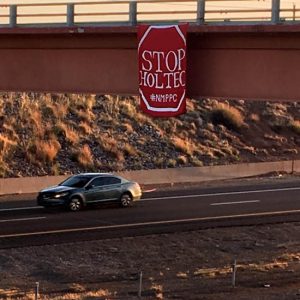 To mark today’s theme of ecological devastation being promoted nation-wide by the Poor People’s Campaign, activists in New Mexico hung two banners over I-25 visible to commuters heading north-bound from Albuquerque to Santa Fe, the state’s capital. The banners conveyed two messages: Stop Holtec and No Holtec No Nuclear Waste, both with the hashtag #nmppc.

Holtec International and the Eddy-Lea Energy Alliance are requesting a license from the Nuclear Regulatory Commission to bring more than 170,000 metric tons of high level radioactive waste from the nation’s 100-plus nuclear reactors (most on the East Coast) to a site between Carlsbad and Hobbs in southeast New Mexico.

The New Mexico Poor People’s Campaign emphatically believes that New Mexico has suffered enough as a national sacrifice zone at the hands of the nuclear industry, including abandoned uranium mines, the Manhattan Project, Trinity Test, plutonium contamination in the rivers downstream from Los Alamos, uranium enrichment, and hosting the nation’s transuranic waste at the Waste Isolation Pilot Plant. As one of the poorest states, and a majority minority state, New Mexico has experienced environmental racism for decades. People of Color continue to be disproportionately impacted by hazardous and toxic wastes. 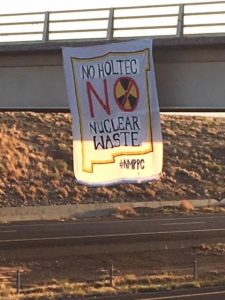 The New Mexico Poor People’s Campaign urges government agencies to keep high level nuclear waste at the reactor sites, where it is produced and currently stored. In only rare exceptions, where waste is located in unstable situations—such as at San Onofre—should waste be moved while keeping it as close to its place of origin as possible. The waste can and should remain where it is until a viable, permanent solution has been agreed upon by local communities. We understand that no community should bear the burden of permanent waste storage, however it is imperative to have meaningful dialogue throughout the country about the realities of longevity and dangers of permanent storage and transport.

We care for communities who live near reactor sites, and recognize the very real threats from radiation—that is why we must stop creating more high level radioactive waste. It is time to shut down nuclear power plants across the country and transition to renewable and sustainable forms of energy. Nuclear waste threatens current and future generations for longer than we can fathom. We must think about future generations when we choose our energy sources.

This is a moral responsibility and part of the greater movement for a moral revival. Banner drops are an example of nonviolent moral direct action, and we are willing to put our bodies on the line to bring attention to the issues that are affecting us all and to show the power of the people. The New Mexico Poor People’s Campaign urges our allies and supporters across the nation to resist Holtec International’s deadly and immoral proposal because it not only impacts us in New Mexico, but all people across the nation living along transport routes- which will likely pass by schools, hospitals, and community centers carrying the most radioactive waste on the planet. We all have a stake in this issue and in the words of Martin Luther King, Jr., “There comes a time when silence is betrayal.” Join the growing movement to break the silence on nuclear waste! 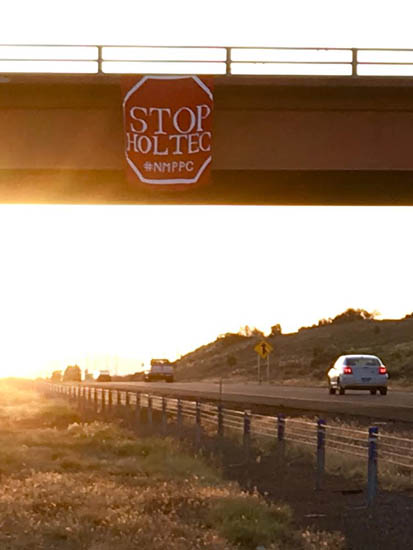 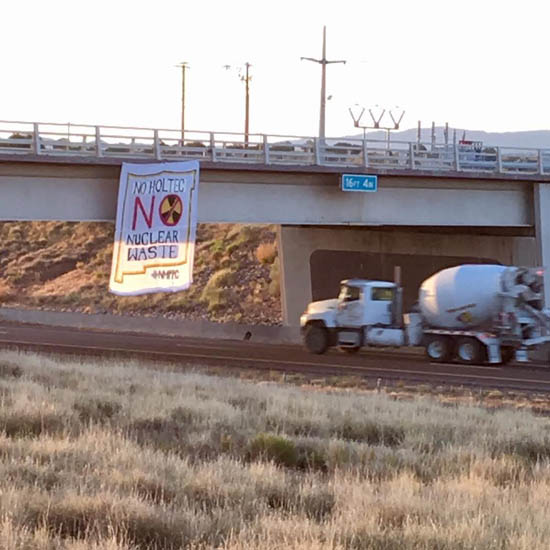