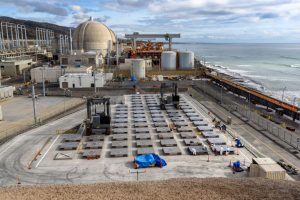 The ongoing burial of spent nuclear fuel at the shuttered San Onofre Nuclear Generating Station has been suspended until regulators can determine why a canister loaded with waste became stuck as it was lowered into a concrete vault, producing high radioactivity readings that alerted workers something was amiss.

This is the second time work has been halted at San Onofre since the spring, when a loose pin was found in one of the canisters that holds the spent fuel.

In the aftermath of the latest incident on Aug. 3, the U.S. Nuclear Regulatory Commission has scheduled a special inspection for Sept. 10. Until then, all work has been halted at the nuclear plant that was decommissioned in early 2012.

"This was an unacceptable event, which is why I halted the fuel-loading," said Tom Palmisano, decommissioning and chief nuclear officer for Southern California Edison, the majority owner of San Onofre. "We will not move fuel until I’m satisfied that we understand how this happened and how to make sure it won’t happen again."

Officials said the canister — which weighs some 50 tons and is full of highly radioactive waste — was no longer tethered to the elaborate machinery designed to support it as it was lowered into the 18-foot-deep vault where it was to be entombed.

Instead, the behemoth rested on a metal guide ring for close to an hour, and could have plunged down, according to the NRC, critics and an independent expert.

How did it get stuck?

"Not exactly a case of square peg in a round hole, but a case of a round peg not properly inserting into a round hole of only slightly larger diameter," concluded Dave Lochbaum, an independent expert with the watchdog group Union of Concerned Scientists in Washington, D.C.

The NRC is launching its own probe of the fuel-loading incident, including the three-day lag between when it occurred and when it was reported.

The NRC team is scheduled to spend about a week on site evaluating the operator’s "cause analysis and the adequacy of corrective actions," the NRC said in a statement Friday. The agency’s inspection report, documenting the team’s findings, will be publicly available within 45 days after the inspection is complete.

Critics say the incident could have resulted in disaster, and blast Edison and contractor Holtec, which is building the "concrete bunker" where 40-some years worth of San Onofre’s spent waste will be entombed until the federal government finds a permanent home for it.

Officials say that there was no risk of disaster. Even if the canister had fallen, it was designed to withstand the impact, and there would have been no danger to the public, according to Palmisano, Lochbaum and officials from the NRC.

The incident was disclosed publicly on Aug. 9, when industrial safety worker David Fritch stepped up to the microphone at the quarterly San Onofre Community Engagement Panel meeting and announced that he might not have a job the following day.

"There were gross errors on the part of two individuals, the operator and the rigger, that are inexplicable," said Fritch, who works for a subcontractor, according to a transcript. "So what we have is a canister that could have fallen 18 feet. It’s a bad day. That happened, and you haven’t heard about it, and that’s not right."

Actually, the NRC had received a "courtesy notification" three days earlier — on Aug. 6 — when Edison reported the incident as a "near miss."

The trouble began at about 1:30 p.m. Aug. 3, as workers for a subcontractor moved the loaded spent fuel storage canister into its storage vault in the Holtec HI-STORM UMAX dry storage system, according to an Aug. 17 NRC memo.

According to Lochbaum’s analysis, drawn from information from both Holtec and Edison, two workers are assigned to monitor the canisters as they are lowered into the vaults. One worker retreated to a safer distance to reduce radiation exposure, while the other manned the controls, intent on ensuring that both sides of the rigging remained level.

They believed the canister was in, but a radiation protection technician detected radiation levels higher than expected for a properly loaded canister. The workers looked into the "transport sleeve" — where they saw that the canister was stuck on a metal flange near the top of the vault.

Could have dropped 18 feet

The rigging and lifting equipment was slack and no longer bearing the canister’s weight, the NRC memo says. It could have fallen 17 to 18 feet into the storage vault if it had slipped off the metal flange, or if the metal flange failed, the memo says.

Workers scrambled to reconnect it to the rigging and lifting devices, and had it loaded into proper position within some 35 minutes, Palmisano said.

The problem, according to the NRC and Lochbaum, appears to be that the canister was misaligned.

"The estimated time the canister was in an unanalyzed credible drop condition was approximately 45 minutes to 1 hour in duration," the NRC said. SCE "halted all dry fuel storage movement operations in order to fully investigate the incident and develop corrective actions to prevent a recurrence."

The three-day lapse between the date of the incident and when Edison informed the NRC upsets many observers.

"We are extremely concerned by the fact that Edison waited three days to report the event," said Charles Langley of Public Watchdogs. "It is alarming to us that the NRC has waited more than two weeks from the date of the event to initiate an investigation."

Palmisano said that the incident occurred on a Friday, and was reported on Monday, the next business day. That will be a matter of discussion going forward, said the NRC, which also wants to know if the vault’s shell or the canister itself suffered any damage that would compromise safety.

Donna Gilmore of SanOnofreSafety.org, a fierce critic of SCE and Holtec, is outraged.

"Is it possible one or more of the canisters was scratched by the metal flange as they were being loaded into the holes?" Gilmore wrote to the NRC. "As you know, this could result in damage to the canister that can accelerate corrosion and cracking. Since canisters cannot and are not inspected for cracks or depth of cracks, this is a significant safety issue."

SCE has determined that neither the flange nor the canister are damaged, and the NRC’s probe will confirm this, Palmisano said.

Edison has loaded 29 canisters into the Holtec system. Experts say dry storage is far safer for spent fuel than the pools where most of the waste currently cools. The remaining 44 canisters of waste are slated to be transferred to dry storage by mid-2019.

No threat of catastrophe?

While critics charge that this was a near-disaster, officials said that, even if the canister had plunged into the vault, it would not have suffered damage that would endanger public health.

"The canisters are designed and built to safely withstand severe events such as drops," said Scott Burnell, spokesman for the NRC.

Holtec has analyzed a 25-foot drop for a similar canister design, the MPC-32, he said. It concluded that the canister and all associated welds would remain intact, preventing any kind of radioactive release, when dropped 25 feet onto a hardened surface. The MPC-37 canisters used at San Onofre have a thicker metal shell and bottom lid than the one Holtec tested, he said.

"If the canister had fallen, SCE would had to have shown, to the NRC’s satisfaction, that the fuel inside either remained in an acceptable condition, or the utility would have to unload and repackage fuel that no longer meets the specifications under the cask’s NRC approval," Burnell said.

But that didn’t happen.

Lochbaum, of the Union of Concerned Scientists, noted that SCE has had two canister incidents at San Onofre so far.

"At this rate, it will experience three more incidents before the transfer campaign is completed," Lochbaum said. "While neither of the events so far posed undue risk to workers or the public, neither should have happened and steps need to be taken to prevent future incidents that could have worse outcomes."