Environmentalists and nuclear watchdog groups are lining up against plans to build a multibillion-dollar storage facility in southeastern New Mexico for spent nuclear fuel from commercial reactors around the United States. 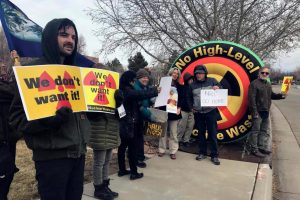 In this Tuesday, Jan. 22, 2019 photo, Brendan Shaughnessy, left, with the Nuclear Issues Study Group, protests with other activists ahead of a meeting of a U.S. Nuclear Regulatory Commission panel in Albuquerque, N.M. Environmentalists and nuclear watchdog groups are lining up against plans to build a $2.4 billion storage facility in southeastern New Mexico for spent nuclear fuel from commercial reactors around the United States(AP Photo/Susan Montoya Bryan) THE ASSOCIATED PRESS

Attorneys for the Sierra Club, Maryland-based Beyond Nuclear and several other groups presented their arguments and answered numerous questions posed by members of a U.S. Nuclear Regulatory Commission panel during an hourslong meeting in Albuquerque.

It will be up to the panel to determine which groups have standing and which objections will be considered as part of what’s expected to be a lengthy process that comes as the national debate simmers over how to handle the radioactive fuel rods that have been building up at nuclear power plants around the country.

Holtec International has applied for a license to construct the storage facility about 35 miles (56 kilometers) east of Carlsbad. It would eventually be capable of storing as much as 173,000 metric tons of high-level waste.

Opponents have concerns about the project’s legality, the potential environmental effects and the safety of transporting the fuel from power plants as far as the East Coast to the New Mexico desert.

Terry Lodge, an attorney representing six of the groups, said there has been little discussion and no specifics offered by Holtec about possible transportation routes. He pointed to previous research done on Nevada’s Yucca Mountain, a mothballed project that would have served as the federal government’s permanent underground repository for such high-level waste.

Lodge told the panel members that millions of people live within 50 miles (80 kilometers) of the transportation arteries that would likely be used, with most of that being railways. He also said barges could be used to move material along the Florida coast, up and down the Mississippi and Tennessee rivers, by the Massachusetts Bay and around Cape Cod.

"This is a major national issue," said Lodge, who described the grass-roots groups and other citizens at the hearing as symbolic plaintiffs who represent the people elsewhere who could be affected.

Some attorneys also argued that Holtec’s application is based on an illegal premise and should be dismissed by the commission. They cited the federal Nuclear Waste Policy Act, which prevents the U.S. government from taking title to privately produced spent nuclear fuel until a final repository is operational.

Holtec officials have argued that the waste could remain the property of the power plants and that its operation would be among the world’s safest, most secure storage facilities.

According to the company, the four-layer transportation casks that would hold the spent fuel would be made of thick steel and lead. The casks would be transported via a designated train with guards and guns.

The company also contends the site in New Mexico is remote and geologically stable. But critics say regulators should consider that the area falls within one of the nation’s most prolific oil and gas basins where there’s no sign of the drilling boom slowing down.

Eddy and Lea County officials have voiced support for the project, citing potential economic benefits for the region. Municipalities elsewhere in New Mexico and Texas have passed resolutions expressing concerns.

It could be more than a month before the panel makes a decision on how the case proceeds. Another company also has applied for a license to build a similar storage facility in West Texas.

Critics say they’re worried that approval in either case could take pressure off the federal government to find a permanent solution for the waste.

Copyright 2019 The Associated Press. All rights reserved. This material may not be published, broadcast, rewritten or redistributed.