An amendment about waste facility fees was added to a widely supported domestic violence bill. Will it stick?

Sen. Lois Kolkhorst’s office said Saturday that she “is still evaluating all options available to save SB 1804.”

BY SHANNON NAJMABADI
The Texas Tribune

The 86th Legislature runs from Jan. 8 to May 27. From the state budget to health care to education policy — and the politics behind it all — we focus on what Texans need to know about the biennial legislative session.

A widely supported bill to protect domestic violence survivors may have hit an unexpected roadblock after the House approved a last-minute amendment that would delay a scheduled increase to the fees a radioactive waste facility in West Texas must pay.

The measure, Senate Bill 1804 by state Sen. Lois Kolkhorst, R-Brenham, could now be headed to a conference committee where lawmakers from both chambers will negotiate its final language and decide if the waste-related amendment will stay. Kolkhorst could also accept the change. Her office said Saturday, "With only hours left available to review the amendments to her bill, Senator Kolkhorst is still evaluating all options available to save SB 1804."

The author of the amendment, state Rep. Poncho Nevárez, D-Eagle Pass, told The Texas Tribune the bill would pass and that he would strip his amendment if necessary.

Kolkhorst’s bill, which sailed through the House and Senate with no opposing votes, requires that bond information about domestic violence offenders be entered into a statewide data repository.

A dearth of centralized data has made it difficult to verify and enforce the conditions of bond, the analysis argues, and leaves "survivors, law enforcement, and the community" at risk and the offender without accountability. The bill would also require that survivors be notified if an offender is released on bond, the analysis says.

Moments before the House gave the bill final approval Wednesday, Nevárez — who sponsored the measure along with state Rep. Sam Harless, R-Spring — added the amendment.

The amendment, he told other state representatives, "offers some economic competitive incentives in the bill" and was "acceptable to the author." The House approved it with a voice vote.

But the amendment has little to do with the bill itself — which Nevárez acknowledges. "It has absolutely nothing to do with domestic violence, and there is no quibbling about that," he said.

Instead, the amendment appears to delay an increase to a surcharge and state fee paid by the private operator of a waste disposal facility. It bears similarities to bills filed by state Rep. Brooks Landgraf and state Sen. Kel Seliger, Republicans from Odessa and Amarillo, respectively, whose bills appear destined to die with only two days left in the legislative session. The amendment "keeps the status quo," Nevárez said; without it, the fee and surcharge paid by the operator would likely increase this year.

"We’re talking about waste that comes from health care facilities, industrial facilities, the oil and gas industry, and from all parts of the state," he said, citing a state report that recommended lowering the surcharges. "So making sure that the facility remains viable and operational is critical to the state’s economy."

Nevárez said the amendment helps an industry that is a big job creator. But he disputed the idea that there was "something shady" about how he was trying to pass it.

"I did this out in the open — I did it on the House floor. I told them the amendment’s about economic competitiveness, and everyone at their desk can read their amendment. Anyone could have gotten up and asked me a question. Nobody wanted to. I can only assume they’re uninterested in it or they’re fine with it," he said. "There’s nothing untoward about putting an amendment on a bill that has nothing to do with one thing or another at this time of session — everyone’s looking for a ride." 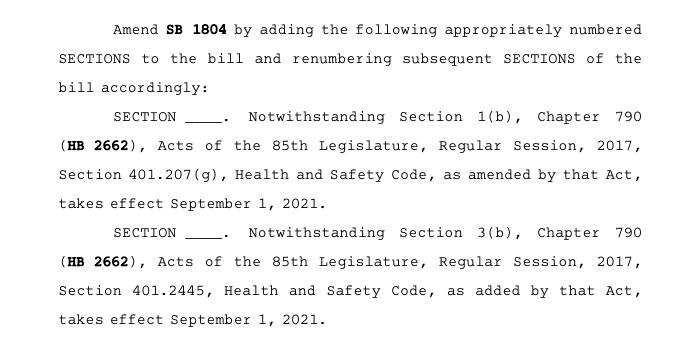