Nuke waste may be hauled through Texas

S.A. could be on trains’ route

The Nuclear Regulatory Commission is reviewing a permit that would allow a Dallas-based company to store high-level nuclear waste brought from reactors around the country. The waste would most likely be shipped via commercial rail.

In the high, dry plains of West Texas sits a hazardous waste site operated by Waste Control Specialists, a company that wants to begin storing high-level nuclear waste from dozens of power plants across the country. 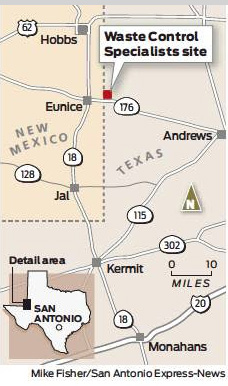 For that waste to get to the facility in Andrews County on the Texas-New Mexico border, it would first travel on thousands of miles of railroad tracks, according to a WCS spokesman and a Federal Railroad Administration document. That could include rail lines that pass through San Antonio, Dallas and Houston, though the specifics so far are hard to come by.

WCS’ site already is one of eight in the U.S. permitted to take low-level radioactive waste, mostly from hospitals and laboratories. High-level waste, which only comes from nuclear reactor fuel or reprocessed fuel, is radioactive enough to kill a person directly exposed to it, so it’s stored in metal canisters inside of concrete casks that can weigh more than 100 tons.

WCS wants to begin accepting high-level waste by 2021. On Jan. 27, the Nuclear Regulatory Commission, an independent agency, declared WCS’ application complete, starting the clock on period for public input that ends March 13. The NRC will hold public hearings in Andrews on Feb. 15 and in Hobbs, New Mexico, on Feb. 13.

Trying to build grass-roots opposition to the new permit, husband-and-wife clean energy activists Tom "Smitty" Smith, who recently retired from running Public Citizen, and Karen Hadden of the SEED Coalition have been visiting Texas cities telling local politicians and news media that the waste could travel through their communities on its way to Andrews. Bexar County Commissioner Tommy Calvert added his voice to theirs in a statement last April.

Officials with WCS and federal agencies that regulate the waste shipments are not giving out details about the exact routes, most likely because of security concerns. The waste would have to be shipped under an agreement between WCS and the Energy Department, which technically owns the waste.

"You’re jumping way ahead of the process," WCS spokesman Chuck McDonald said by phone. "We’ve got a license application to get a (consolidated interim storage facility) license. And then we want to construct and operate a facility. If that would happen, DOE would have to take title to this waste and then the contract would be at DOE. All that would have to happen but that hasn’t happened yet."

Information on the metal canisters and concrete casks used for transport is easier to find. The manufacturers, AREVA Inc. and NAC International, are working on the application with WCS. An independent 2006 report by the National Research Council committee states that these kinds of casks can withstand drops, puncturing, explosions, submersion and other calamities, though they may be vulnerable to "very long duration, fully engulfing fires."

Small amounts of nuclear waste from research reactors in other countries already have been shipped to sites in South Carolina and Idaho, federal documents show. Federal agencies are supposed to work with rail carriers to use the "highest-rated" tracks, coordinate with state and local governments and conduct crew training and inspections, according to an FRA oversight plan.

"The transportation is the No. 1 issue people ask about, but when they actually get a chance to see it, they actually feel pretty confident because it’s highly regulated," McDonald said.

Hadden and Smith prefer to focus on the what-ifs.

"You’ve got this stuff going out in the middle of the desert with temperature extremes," Hadden said. "You’ve got intense storms and flooding, lightning, wildfires. … I don’t think the casks are at all robust enough."

Accidents are not unheard of in the nuclear waste field. The wrong brand of cat litter caused a two-year shutdown of the DOE’s Waste Isolation Pilot Plant, an underground storage site for defense-related radioactive waste outside of Carlsbad only 43 miles from WCS, in an area sometimes referred to as New Mexico’s nuclear corridor.

In 2014, a barrel of waste at that site burst, releasing radioactive materials, after someone packed it with organic cat litter instead of the inorganic brand they usually use, according to a DOE investigation. The site reopened Jan. 9.

Still, two independent experts who worked on the 2006 waste transportation study committee told the San Antonio Express-News that the cask systems used for spent nuclear fuel storage and transport can withstand nearly any real-world calamity, including a terrorist attack.

"I became convinced in my association with the committee that you could do it safely," said Melvin Kanninen, a San Antonio resident and mechanical engineer formerly with Southwest Research Institute. "And even if a terrorist decided to do some damage, he’d have a hard time doing it."

WCS’ site now has become part of the debate over what to do with spent nuclear material being stored at 67 sites in 34 states, including the South Texas Project in Bay City, the nuclear power plant partly owned by CPS Energy.

The fuel is kept in concrete-lined pools of water 40 feet deep or in above-ground casks. Spent fuel only 10 years out of the reactor still emits 20 times the amount of radiation per hour it would take to kill a person all at once, the NRC reports.

So far, the U.S. has no viable permanent disposal site for this waste, which continues to emit unsafe levels of radiation for hundreds of thousands of years after it has grown too thermally cool to efficiently generate electricity.

Hadden thinks the real priority should be on finding a permanent site.

"We don’t think it should be moved until that site is found and developed because it’s a huge risk to transport this, and it should only get transported once," she said.

Other countries also have struggled to find a long-term site. Canada, Germany, Japan and South Korea store it at the reactor site, while France and the United Kingdom reprocess theirs into new fuel.

Only one other company has a similar permit for high-level nuclear waste — Private Fuel Storage, which received approval in 2006 after nine years of NRC review. The site has not been built, NRC spokeswoman Maureen Conley said.

Another company, Holtec International, is expected to file an application in March for another site in Lea County, New Mexico, across the Texas border from WCS.

For 30 years, the Energy Department’s goal was to store the waste inside the hollowed-out Yucca Mountain in Nevada until a permanent disposal site could be found. The DOE spent $15 billion developing the site, but the Nevada congressional delegation, led by for now-retired Democratic Senate Minority Leader Harry Reid of Nevada, has successfully blocked it.

In the coming weeks, the Senate will vote whether to confirm former Texas Gov. Rick Perry, who has supported WCS in the past, to lead the DOE.

From 2000 to 2011, Perry’s campaigns took in at least $1.1 million from Dallas billionaire and WCS owner Harold Simmons, who died in 2013. As governor, Perry wrote a letter in 2014 supporting WCS’ permit application for high-level waste storage.

At Perry’s recent confirmation hearing, Sen. Catherine Cortez Masto, D-Nevada, asked him if he supported a requirement that the Energy Department, if it does decide to use Yucca Mountain, get Nevada’s consent.

"I’m going to work very closely with you and the members of this committee to find the answers to these challenges," Perry said. "I think that we can find a solution, both in the interim and long term, (for) our nuclear waste."

Federal campaign records appear to show no donations from top executives of WCS or its parent company, Valhi Inc., to Perry’s 2012 and 2016 presidential campaigns.

WCS is fending off a Justice Department antitrust lawsuit that would block the proposed acquisition of WCS by EnergySolutions, which also disposes of low-level waste.

The government contends that the $367 million deal would stifle competition, which has led to lower disposal costs for commercial customers.