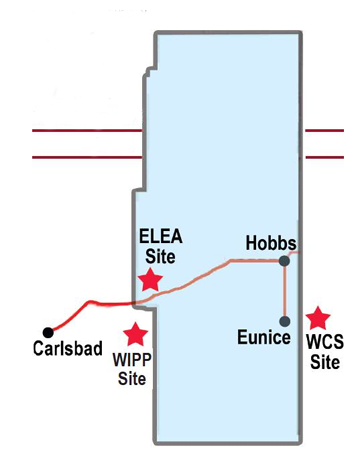 The U.S. Nuclear Regulatory Commission on Thursday announced the beginning of a detailed safety, security and environmental review of a Holtec International’s application to store spent nuclear fuel from power plants at a temporary facility in between Hobbs and Carlsbad.

Holtec initially submitted the application for a license in late March 2017 and responded in December to the NRC’s July requests for further information. The company stated the NRC provided a preliminary schedule that envisages the issuance of license by July 2020. However, the date could be sooner if Holtec’s responses to the regulatory queries are timely and of high quality.

Accepting Holtec’s application as sufficiently complete, the commission said the proposal is ready to begin the technical review process that eventually involves expert testimony and public comment. During the past two years, local leaders and politicians, including Gov. Susana Martinez, have expressed support.

The 1,045-acre land on which Holtec proposes to construct the HI-STORE CIS (Consolidated Interim Storage) facility, on the Lea County side of the Eddy-Lea counties line, is owned by the Eddy-Lea Energy Alliance (ELEA). The alliance is a partnership between the cities of Hobbs and Carlsbad and the counties of Lea and Eddy.

The facility is a subterranean used nuclear fuel storage system with a maximum storage capacity of 10,000 canisters. The initial license application is for 500 storage cavities which will cumulatively hold 8,680 metric tons (nominal) of fissile material.

Hobbs Mayor Sam Cobb, a member of ELEA, said the NRC’s announcement is an indication of the quality of both the application and the applicant.

"Holtec has done everything they agreed to do in terms of the ELEA project," he said. "It’s a very good project for the long-term future of the community. It’s a lot of economic development and revenue stream opportunities for respective partners. I hope it continues to move forward positively."

John Heaton, the Carlsbad-based chairman of the ELEA board of directors noted a moral obligation to resolve a national problem.

"In this country, those of us that have specific assets like our remoteness and geologic stability have a moral obligation to step up and to help solve this exacerbating spent fuel problem," he said. "This project, by reducing the risk of presently stored materials in densely populated area, on the banks of major rivers, in highly seismic areas and on ocean fronts helps our country solve this festering problem."

Holtec is seeking an initial 40-year license for an underground storage facility that could accept radioactive-used fuel that is piling up at reactors across the United States.

The facility would be built to store spent nuclear fuel from the nation’s power plants until a permanent disposal facility is identified.

Cobb said the licensing process will involve the public extensively.

"It’s going to be an open and transparent process. There will be a lot of opportunities for our community to speak on behalf of the project or to speak against the project. The NRC will handle all of that," he said. "It will be publicized across the region and the state. We look forward to having that discussion and educating the public on the opportunity it presents and that we think the science supports the safety of the project."

Nuclear safety advocates warned of transportation risks associated with moving massive casks of spent nuclear fuel thousands of miles to New Mexico, and urged the public to speak up about the proposal.

"Up to now, it’s been Holtec talking to the Nuclear Regulatory Commission for the last 11 months," said Don Hancock, nuclear programs director for the Southwest Research and Information Center, an Albuquerque-based environmental protection group. "Now the public is going to be able to get involved."

The public already has. At the Feb. 20 Hobbs City Commission meeting, Cobb and the Hobbs commissioners listened to the objections of Hobbs residents.

"I do not consent to it," said Hobbs resident Byron Marshall. "After doing my due diligence, it has come to my attention that it is too much of a risk to the families and the community of Hobbs. The possibilities of a radiation leak, of an accident, of transporting … high-level nuclear waste … coming here via rail thousands of miles away, the transport route alone is a hazard that is unfathomable. But to bring it here and to call it a interim facility and saying that it is only going to be used temporarily until we find a final resolution for it is kind of bogus. Once it gets here, it’s not going anywhere else because no else wants it."

The idea of bringing high-level radiative waste to southeast New Mexico is a "game-changer" Marshall said.

"If once it does get finalized and it does get built here, I have to think about moving somewhere else," Marshal said. "I don’t want this place to be another Fukushima."

Recognizing this as a major step in the process, Heaton is confident the right decision will be made.

"The NRC is an extremely technical regulator that is not well known by the public, but it may be (one of) the toughest, if not the toughest, regulator in the U.S.," he said. "They are a no-nonsense regulator singularly focused on safety and security through licensing, construction and operation of any commercial nuclear project."

Also a member of the ELEA board, Lea County Chairman Ron Black appreciated the NRC’s announcement.

"That’s just a step in the process, but it’s progress," he said. "It just shows things are moving forward and Holtec is doing their due diligence."

Curtis Wynne may be contacted at reporter3@hobbsnews.com.