Holtec Pitches a Precursor to Yucca Mountain for Nuclear Waste

A proposed 1,000-acre project in southeastern New Mexico could temporarily address a question that bedevils energy companies, confounds policymakers, and polarizes communities: where to put the country’s most dangerous commercial nuclear waste.

The federal government is two decades behind its deadline to open permanent storage deep underground to put used fuel from commercial nuclear power plants. Leaders in southeastern New Mexico say they’re ready to keep the hot, radioactive materials that those plants want gone until a long-term solution is ready at Nevada’s Yucca Mountain or elsewhere.

Nuclear technology company Holtec International is working with an alliance of local governments there to pitch a project that eventually could store up to 120,000 metric tons of used fuel—more than U.S. nuclear reactors have created to date. Utilities such as Southern California Edison are watching to see if they’ll soon have an option to move waste off their sites.

Federal regulators are reviewing Holtec’s initial application to hold 500 canisters of used fuel between the cities of Carlsbad and Hobbs, near the Texas border. But a license from the Nuclear Regulatory Commission alone won’t be enough to launch the facility.

Backers must push Congress to change the law that governs national nuclear waste storage, or find another way to fund the project. Critics say opposition will prevent the site from ever receiving a shipment of waste in a state that has no commercial nuclear power plants of its own.

And New Mexico state leaders may change their take on the proposal, depending on who is elected in November to replace Gov. Susana Martinez (R). Martinez and the Legislature have supported the storage concept, though some lawmakers are asking for a closer look at the plan.

"We shouldn’t start with the position of ‘Sure, why not?’ " Steinborn told Bloomberg Environment.

Site Near Other Waste Project

Camden, N.J.,-based Holtec is among the first companies in the U.S. proposing a central, interim site to hold the byproduct of nuclear energy creation. The waste comes from power plants that use uranium fuel to produce electricity until it’s "spent," or no longer efficient.

The fuel rods remain radioactive for thousands of years. Plant operators move them to steel-lined pools and later to dry casks.

The U.S. Department of Energy is responsible for permanent disposal of the rods, but plans to develop a facility at Yucca Mountain have stalled for decades amid vehement opposition from Nevada officials. Temporary storage aims to consolidate waste more quickly from dozens of sites throughout the country.

Leaders in two New Mexico counties say they have the perfect location. Their consortium, the Eddy-Lea Energy Alliance LLC, owns more than 1,000 acres of dry, vacant land and solicited proposals for nuclear storage.

The location is more than 30 miles from the nearest town and close to the Waste Isolation Pilot Plant, or WIPP. That Energy Department facility stores nuclear waste that’s trucked in from defense plants, such as contaminated tools and rags, in underground salt mines. Most WIPP waste isn’t as as "hot" as high-level waste; Alpha particles in the plutonium from it can’t penetrate skin or even a sheet of paper. But the WIPP waste is still extremely deadly if absorbed into the bloodstream and remains radioactive for thousands of years.

Sealed canisters of used fuel for the Holtec site would arrive in New Mexico by train in transport casks designed to shield radiation. The company would place spent fuel underground in individual enclosures that could eventually be moved to permanent storage elsewhere.

"No conceivable natural or man-made phenomenon could actually impact the fuel," she said.

The NRC is considering an initial license that would let Holtec store 500 canisters for four decades. Twenty planned phases could eventually bring 10,000 canisters to the site, according to the company.

Holtec will fund the license process but needs a policy change or agreement with utilities to actually build the project, Russell said. Federal law doesn’t allow the Energy Department to pay to transport and store spent fuel temporarily.

A private interim facility would be "the quickest, and probably the least expensive, way for the federal government to start to meet its used nuclear fuel obligations," Alexander, who chairs the Senate Appropriations Committee panel that funds the Energy Department, said last year.

Fuel Could Get Moved Quicker

Companies such as Southern California Edison also see promise in the Holtec project and similar proposals for their decommissioned nuclear plants. The utility owns San Onofre Nuclear Generating Station, located between San Diego and Los Angeles, which closed in 2013.

A group of California nuclear power plant owners backs options to help them relocate spent fuel, spokeswoman Maureen Brown told Bloomberg Environment in an email. The plants store their waste on site, which is safe but a cost burden for customers, she said.

Utilities throughout the country have sued the federal government for delays in opening Yucca Mountain or another permanent facility and leaving them to store their own fuel. The Department of Energy paid the industry more than $6 billion in damages by the end of fiscal year 2016, according to the Government Accountability Office.

An interim facility could be the fastest way to move spent fuel as work continues on a permanent site, Jon Rund, associate general counsel for the Nuclear Energy Institute, told Bloomberg Environment.

"You’re able to then redevelop those sites for other purposes," he said.

The institute, the nuclear industry’s lobbing arm, is particularly encouraged by the possibility of competition for temporary storage, Rund said. A proposal put on hold last year in Andrews County, Texas, is starting again under a new partnership.

Nuclear services company Orano USA and Waste Control Specialists will ask regulators in June to resume reviewing an application to bring used fuel to a site that already stores low-level waste. The focus is on fuel from shuttered reactors, said Jeff Isakson, CEO of the joint venture Interim Storage Partners.

The projects would be welcome news to most people who live near the San Onofre plant, said David Victor, chair of the San Onofre Community Engagement Panel and a professor of international relations at University of California-San Diego. Spent fuel is the most talked about issue at the public meetings on decommissioning the panel leads.

The worst-case scenario is to have the legacy of the plant without its benefits, Victor said. But he said residents also don’t want to dump their problem on an unwilling community.

No consensus on the Holtec project was apparent at a recent meeting in Carlsbad, a city that draws tourists to nearby limestone caverns of the same name. Nuclear Regulatory Commission members stayed late into the night to hear comments on the earliest stages of their environmental review, which its staff expects to complete in mid-2020. 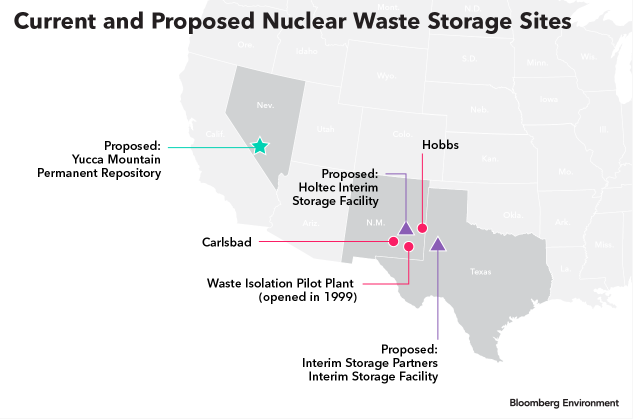 The nuclear workforce in the area has no experience with commercial spent fuel, he said. The safety record of WIPP, which stores a much different type of waste and receives shipments via truck and not rail, doesn’t translate, he said.

WIPP first opened in 1999 to permanently store waste from Cold War nuclear weapons production sites. It shut down in February 2014 after a fire and release of radiation, reopening again in January 2017.

A leak at the Holtec site could impact one of the country’s most productive oil and gas fields, while an oil and gas explosion could threaten stored waste, Hancock said. The country’s rail system can’t handle the heavy cars needed to transport spent fuel, he said.

"I think there is close to zero chance this facility will ever operate," Hancock told Bloomberg Environment. "Transportation would be very dangerous, and an accident would disrupt a lot of existing industries that are much more economically beneficial than anything that the Holtec site would be."

Other opponents said the project goes beyond New Mexico to impact anyone who lives near a transportation route. Even many area residents don’t know about the proposal, Rose Gardner from the Alliance for Environmental Strategies told regulators.

Gardner, of Eunice, N.M., said people who do know about the project are anxious about impacts on the rivers and lakes that give New Mexico its "Land of Enchantment" moniker.

"We are not going to be considered the land of high-level nuclear waste," she said.

Rep. Michelle Lujan Grisham (D), one of the Democrats running for governor, voted against the House-passed legislation that would move Yucca Mountain forward because of her opposition to the Holtec proposal.

"This bill will only create more uncertainty by creating a dangerous loophole that could permanently strand nuclear waste in New Mexico without any guarantee that a long-term strategy will eventually be agreed upon," Lujan Grisham said in a statement.

Sen. Tom Udall (D) echoed those concerns, saying he wants a permanent storage site before opening a temporary one.

"If you open up an interim facility before you do a permanent one, you’ve just created a permanent facility," Udall told Bloomberg Environment.

Supporters characterize the concerns as hype. The project is actually more benign than most industrial endeavors, said John Heaton, chair of the Eddy-Lea Energy Alliance and a former state lawmaker.

For southeastern New Mexico, the project means new jobs and a continuous cash flow provided through an agreement with Holtec, Hobbs Mayor Sam Cobb said. That money could be used to keep steadier an economy based largely on oil and gas, he told Bloomberg Environment.

"It could level out some of those peaks and valleys that we have," Cobb said.

Holtec said at a hearing that the project would create about 100 construction jobs for 10 years as well as another 100 permanent operations jobs.

Other local supporters said New Mexico has a moral duty to help communities move their nuclear waste. Many said they are proud of WIPP and its role in cleaning up waste sites.

"We have this nationalistic spirit about what we’re doing," Heaton said.

—With assistance from David Schultz.

To contact the reporter on this story: Brenna Goth in Phoenix at bgoth(at)bloomberglaw.com

To contact the editor responsible for this story: Rachael Daigle at rdaigle(at)bloombergenvironment.com