AUSTIN — Contentious legislation that would have given financial breaks to the company that operates the storage site for low-level radioactive waste in remote West Texas was derailed Wednesday on a procedural technicality in the state House.

The maneuver to knock down House Bill 2692 short-circuited what had been expected to be a freewheeling floor debate over whether the bill would have provided a backdoor to bringing the most dangerous waste from decommissioned nuclear power plants to Texas. 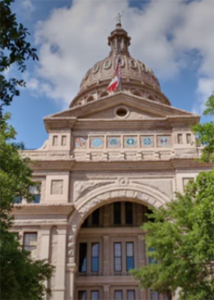 A bad radioactive waste bill in the Texas Legislature must be stopped. The Senate version is SB 1046 (by Senators Birdwell and Seliger) and the identical House bill (by Rep. Landgraf) is HB 2692.

Governor Abbott vetoed these massive financial giveaways to WCS last session, but the company is back, wanting this and more. Texas would lose hundreds of millions of dollars, or more, from low-level radioactive waste surcharges if this bill passes. Our state won’t be able to afford contamination cleanup without this funding.

Safety regulations would be loosened and an antitrust requirement would be removed.

Two companies seek licenses to import thousands of tons of deadly nuclear reactor waste and store it for decades at sites in Texas and New Mexico.

Help halt these dangerous plans by writing to your Congressional Representative today!

To send a letter to your Congressional Representative – click here!

Depending on who is interpreting it, legislation moving closer to a vote in the Texas House and Senate would either shut the door to the state ever becoming home to high-level radioactive waste or carve a path to bring it in.

Two separate but similar bills — one in the House and the other in the Senate — seek to lower state fees and surcharges imposed on Waste Control Specialists that operates a storage and disposal site in Andrews County, near the border with New Mexico.

A project to store high-level nuclear waste in southeast New Mexico was delayed as the federal government sought more answers from the company proposing to build and operate the facility as to its potential risk to human life.

Holtec International proposed to build the consolidated interim storage facility (CISF) to temporarily hold spent nuclear fuel rods from generator sites across the country as a permanent repository was developed.

Semis hauling millions of radioactive loads across the country

Each year, millions of radioactive loads are shipped across the country, many on trucks that travel right beside you on our highways.

The federal government says the shipments are safe, but some of those who handle and haul the toxic material disagree.

Noel V. Marquez of Lake Arthur, 67, an honored New Mexico painter and a leader of environmental protection efforts, passed away Dec. 23 after a long illness, according to family members.

Marquez was the 2008 recipient of the Governor’s Award for Excellence in the Arts. He was known for his large murals in New Mexico communities, including Carlsbad, Hobbs and Artesia, where he was born on June 4, 1953.

By Haley Samsel
Fort Worth Star-Telegram

If approved by federal regulators, at least 5,000 tons of high-level nuclear waste from across the U.S. could travel through the Metroplex on its way to a West Texas storage facility that already stores low-level radioactive materials.

High-level nuclear waste refers to spent, or used, reactor fuel and waste materials that exist after the used fuel is reprocessed for disposal. The radioactive waste poses potentially harmful effects to humans and only decreases in radioactivity through decay, which can take hundreds of thousands of years, according to the Nuclear Regulatory Commission, the federal agency that regulates nuclear power plants and the storage and disposal of waste.

Activists who oppose the West Texas plan say the impact will not be limited to residents of Andrews County, where the toxic waste site owned by Waste Control Specialists already sits near the Texas-New Mexico border. The commission is considering a similar plan for a high-level waste storage facility in southeastern New Mexico, brought forward by the nuclear company Holtec.

SEED Coalition is a party in the legal case opposing high-level radioactive waste storage at WCS’ site in Andrews County, Texas and we just filed a new contention regarding significant risks of transportation of this deadly nuclear material. Hopefully, the Atomic Safety and Licensing Board will pay attention to this critical issue and the technica lhurdles that have now been documented by the U.S. Nuclear Waste Technical Review Board in a report to Congress and the DOE. 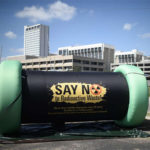