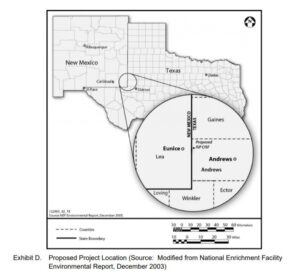 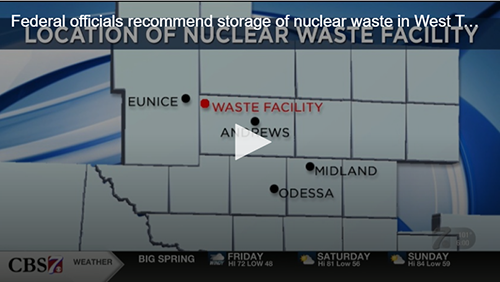 WEST TEXAS — The federal government has taken another step toward storing the nation’s nuclear waste in West Texas.

This week, the Nuclear Regulatory Commission released a report recommending the approval for radioactive waste to be transported across Texas, and stored in Andrews County.

The existing facility near the Texas-New Mexico Border is operated by Waste Control Specialists, and a joint venture called Interim Storage Partners hopes to bring the nation’s high-level nuclear waste to the facility.

"The employees of WCS live here and are part of this community," Elicia Sanchez with Interim Storage Partners said. "We are very confident in the safety of our facility, and very excited about the opportunity that it will bring the community of Andrews."

If approved, the company would receive a 40-year license to bring about 5000 metric tons of nuclear waste to West Texas.

And while the company and its website swear by the safety of the storage process, Andrews County residents are still worried.

"Very dangerous," Elizabeth Padilla with the group ‘Save Andrews County’ said. "We’re talking about the nation’s spent fuel from nuclear reactors across the country. The waste that nobody wants. The high radioactive waste."

Those against the storage of waste say that people in Andrews aren’t the only ones who should be concerned.

To get to the facility, the nuclear waste must travel by truck or train through Texas cities

"Midland in particular it would definitely come right through the downtown area," Karen Hadden with SEED Coalition said. "This material has to be isolated from living things for a million years, and there is no way that a facility in Texas, the one that’s being looked at, could do that."

The public is now allowed to comment on the draft and attend meetings held by the NRC.

The final environmental impact statement is scheduled to be released in May of 2021.