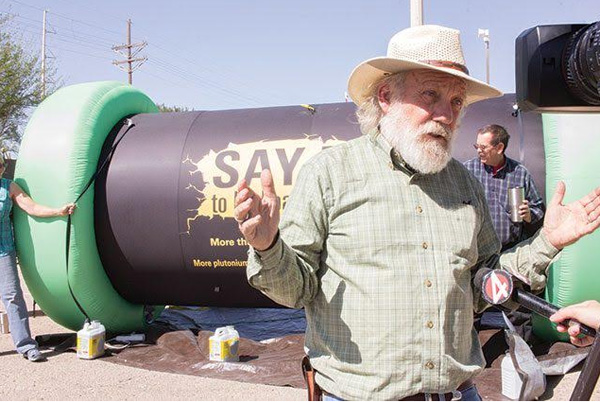 Tom “Smitty” Smith, director of special projects at Public Citizen’s Texas office, speaks with KOB 4 Eyewitness News reporter Casey Torres in front of a mock radioactive waste canister at the Anderson Museum of Contemporary Art during a news conference Thursday morning. Smith, along with other citizens, argued against Holtec International’s plan to store nuclear waste at a site between Hobbs and Carlsbad. Trevier Gonzalez Photo

An inflated mock-up of a radioactive waste canister was at the center of a news conference held in front the Anderson Museum of Contemporary Art Thursday morning.

In front of the 8-by-16-foot mock canister, activists from near and far spoke to the media about a controversial plan to store nuclear reactor waste at a site between Hobbs and Carlsbad.

"Our friends on the other side keep talking about how many jobs are gonna be created," Smith told the Daily Record before the conference. "Really, when you look at the very bottom line, it’s 55 workers is what you’re gonna have total — not the hundreds they’re talking about."

"They’re saying the ground movement we’re seeing is not normal across a 4,000 square mile area of West Texas," Deason said. "These hazards — and I’m quoting — of shifting and sinking ground represent a danger to residents, roads, railroads, levees, dams and oil and gas pipelines, plus potential pollution of groundwater.

Smith spoke reiterated the idea that bringing nuclear waste to the New Mexico area is not a good idea.

"Fundamentally, bringing high-level radioactive waste to southeast New Mexico for storage is a dumb idea for a number of reasons," Smith said. "There’s going to be significant risk bringing casks like this down the railroad track from all over the country, through New Mexico, through Roswell and Carlsbad, and then out to the wayside."

Smith said that if the proposal does go through, the waste is supposed to be eventually sent off to a high-level radioactive waste repository underground.

"The nuclear age began in the 40s," Smith explained. "We still haven’t figured out what that repository is or where to put this stuff, so why do we believe that somehow, magically, we’re going to find a high-level radioactive waste repository and that once it’s here, it’s out of sight, out of mind."

Smith said there will be an opportunity to learn more about the situation and comment on April 30. That’s the date of a public hearing at EMU-Roswell’s Campus Union Building, Room 110, from 4-7 p.m.

A meeting in Hobbs is set for 7 p.m on May 1 at the Lea County Event Center. Lastly, a hearing will also be held on May 3 at the Eddy County Fire Service Training Division at 7 p.m.