Nuclear waste could be headed to West Texas under house bill 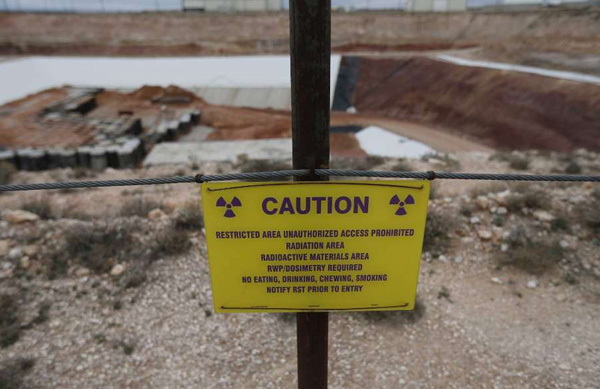 WASHINGTON – Radioactive waste from nuclear power plants across the country could be headed to West Texas under legislation passed by the House today.

The legislation, which passed 340 to 72, directs Secretary of Energy Rick Perry to find interim storage sites for the growing stockpile of waste at the nation’s nuclear power plants, while also restarting the licensing process for a controversial permanent storage facility in Nevada, at the Yucca Mountain site.

Finding communities willing to take the radioactive waste has proven hugely difficult in the past, but one option available to Perry would be an existing hazardous waste site in Andrews County in West Texas, where Dallas-based Waste Control Specialists is proposing to store spent nuclear fuel until a permanent storage facility is completed.

The legislation, which was introduced last year by Rep. John Shimkus, R-Ill., has passed in similar form in past Congresses but has so far failed to win support in the Senate. At issue are concerns from communities surrounding potential storage sites, as well as criticism from environmentalists who argue transporting the waste to multiple sites is simply too dangerous.

"The whole nation could be at risk from an unprecedented mass movement of high-level radioactive waste across the nation, with 10,000 rail cars of deadly waste being transported over a period of 20 or more years," said Karen Hadden, director of the Austin-based advocacy group Sustainable Energy and Economic Development Coalition.

Within the Texas congressional delegation, Republicans nearly unanimously voted for the bill while the Democrats split, with Rep. Beto O’Rourke, of El Paso, who is challenging Sen. Ted Cruz in the midterms, and Rep. Al Green, of Houston, among those opposed.

WCS announced earlier this year it was partnering with the French energy giant Orano, which has a long history of managing and storing nuclear waste in France. That nation operates more nuclear reactors than any country in the world besides the United States.

WCS and Orano have since notified the Nuclear Regulatory Commission they plan to resume the licensing process, which WCS suspended last year due to financial concerns, said Thomas Graham, a spokesman for the joint venture.

"Nuclear fuel management has been successfully addressed for more than 60 years without any industrial accidents," he said. "The processes that are in place are redundant and thorough."

But West Texas is not the only region being targeted for nuclear waste.

Holtec International, the New Jersey-based equipment supplier, has proposed a storage site in southeast New Mexico to store 120,000 tons of nuclear waste, according to the non-profit Nuclear Information and Resource Service. The NRC is reviewing that application and is currently staging a series of public meetings in New Mexico to discuss the proposal.