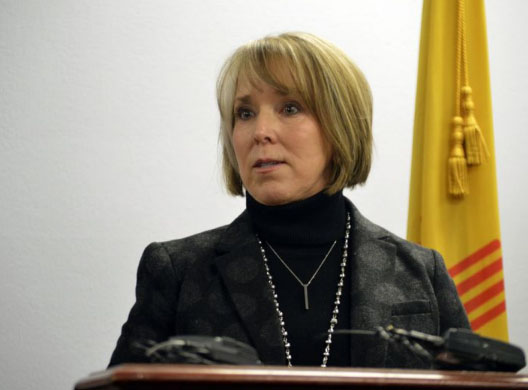 Any disruption of agricultural or oil and gas activities as a result of a perceived or actual incident would be catastrophic, she said, adding that such a project could discourage future investment in the area.

"Establishing an interim storage facility in this region would be economic malpractice," she wrote.

Holtec International has defended its plans, citing unmet obligations by the federal government to find a permanent solution for dealing with the tons of waste building up at nuclear power plants.

The company says the four-layer casks that would hold the spent fuel would be made of thick steel and lead, and transported on a designated train with guards and guns.

Holtec also contends the site in New Mexico — about 35 miles (56 kilometers) from Carlsbad — is remote and geologically stable.

Lujan Grisham’s stance marks a shift from the previous administration, which had indicated its support for such a project.

During her last year in Congress, Lujan Grisham, a Democrat, opposed changes to the Nuclear Waste Policy Act and the possible development of a temporary storage facility in New Mexico. She was concerned that loopholes could be created and result in the waste being permanently stranded in New Mexico.

Several environmental groups also have protested the idea of an interim storage site for spent nuclear fuel. The groups raised their concerns during a hearing before federal regulators earlier this year.

Opponents question the project’s legality, the safety of transporting high-level waste from sites scattered across the country and the potential for contamination if something were to go wrong.

The governor’s letter came as the Nuclear Regulatory Commission considers whether to issue a 40-year license for the facility proposed by Holtec.

The company has the support of Eddy and Lea County officials, who have said the project would have economic benefits for the region.

Southeastern New Mexico is already home to the federal government’s only underground repository for radioactive waste remaining from years of bomb-making and nuclear research.

Municipalities elsewhere in New Mexico and Texas have passed resolutions expressing concerns about an interim storage proposal in the region.

Reams of documents have already been submitted to the regulatory commission, and the overall permitting process is expected to be lengthy.

A Texas-based company also has applied for a license to expand its existing hazardous waste facility in Andrews County, Texas, to include an area where spent fuel could be temporarily stored.